A water mill is a structure that uses a water wheel to drive a mechanical process such as grinding flour, lumber, textile production, or metal shaping. 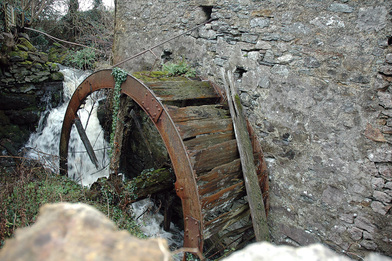 A Brief History:
The first documented use of a water mill was in the first century BC and the technology spread quite quickly across the world. Commercial mills were in use in Rome and Britain and by the time of the Doomsday Book in the late 11th Century there were more than 6,000 water mills in England. By the 16th Century water power was the most important source of motive power in Britain and Europe. The number of mills probably peaked at more than 20,000 mills by the 19th Century. 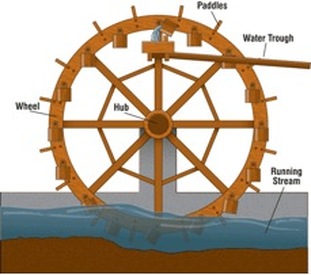 Water mills use the flow of water to turn a large water wheel. A shaft connected to the wheel axle is then used to transmit the power from the water through a system of gears and cogs to work machinery, such as a millstone to grind corn. Watermills are usually built beside streams or rivers to use them as a water supply. Very often these supplies were improved by the supply of mill races and weirs to help overcome the problems of different seasonal water levels. Many of the weirs seen on rivers today were originally built to help control water levels for watermills.

There are many types of water mills. You will find the main types listed below: Gristmills, or corn mills, which grind grains into flour. These were undoubtedly the most common kind of mill.
·       Sawmills cut timber into lumber.
·       Bark Mills stripped bark from trees or ground it to powder for use in tanneries.
·       Spoke mills turned lumber into spokes for carriage wheels.
·       Cotton mills were usually powered by a water wheel at the beginning of the industrial revolution.
·       Bobbin Mills made wooden bobbins for the cotton and other fabric industries.
·       Carpet mills for making rugs were sometimes water-powered.
·       Fabric mills for weaving cloth were sometimes water-powered.
·       Powder mills for making gunpowder, black powder or smokeless powder were usually water-powered.
·       Blast Furnaces, finery forges, and tinplate works were water powered. Furnaces and Forges were sometimes called iron mills.
·       Blade mills were used for sharpening newly made blades.
·       Slitting mills were used for slitting bars of iron into rods, which were then made into nails.
·       Rolling mills shaped metal by passing it between rollers.
·       Lead was usually smelted in smelt mills prior to the introduction of the cupola (a reverberatory furnace).
·       Paper mills used water not only for motive power, but also required it in large quantities in the manufacturing process. 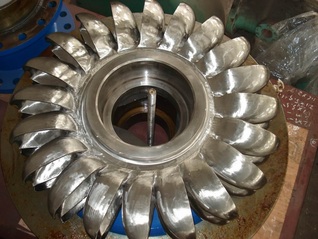 By the early 20th century, the water mill gave rise to the water turbine, and cheap electrical energy made the watermill outdated in developed countries - although some smaller countryside mills continued to operate commercially into the 1960s. In some developing countries the watermill is still widely used for processing grain. There are approximately 25,000 water mills operating in Nepal, and 200,000 in India. A water mill that generates electricity is usually called a hydroelectric power plant.
Powered by